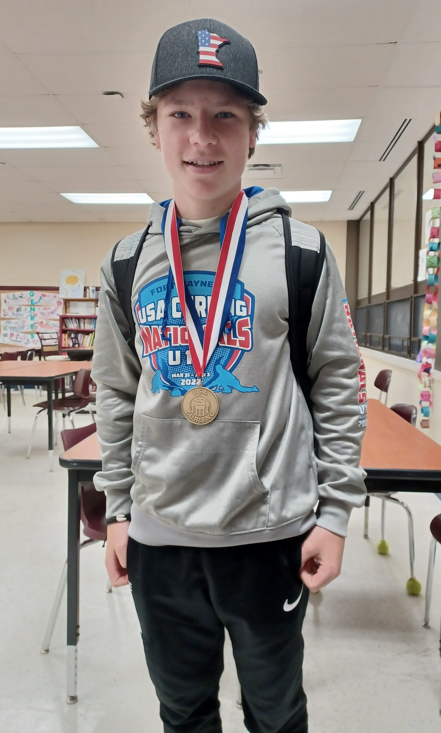 Mason Guentzel, a Central Middle School student, has accomplished something not many people have; Mason is a National Curling Champion winning a Gold Medal at the 2022 U18 Nationals in April.

Mason first learned about curling from his aunt Norma; "She got my parents into it because she went to Worlds," Mason said. When Chaska opened its curling center, his parents joined a league and 5 years ago, Mason joined the junior league.

During the school year, Mason practices 3-4 times per week; sometimes 5 days a week if there is a tournament coming up. In the summer, he practices twice a week. Practices are at Chaska Curling Center and St. Paul Curling Club.

In the Juniors Club at the Chaska Curling Center, there are around a hundred players with approximately 30 in Mason's high school age group. Mason's teammates include Will, from Chaska, and Stuart and Sidney from St. Paul.

Generally, Mason and his team compete against teams from Minnesota and Wisconsin. For Nationals, they compete against other regional qualifiers. For junior tournaments, Mason competes against players 21 years and younger from all over the country and Canada. For Nationals, he traveled to Indiana and he will travel to Canada for his next tournament.

When asked, what comes next for you and this sport? Mason replied, "I hope to make the Junior Olympic team, and then next year, I would love to make it to the U21 Nationals."

"I recommend people try it. It's a lot harder, but more fun than people think it is!"